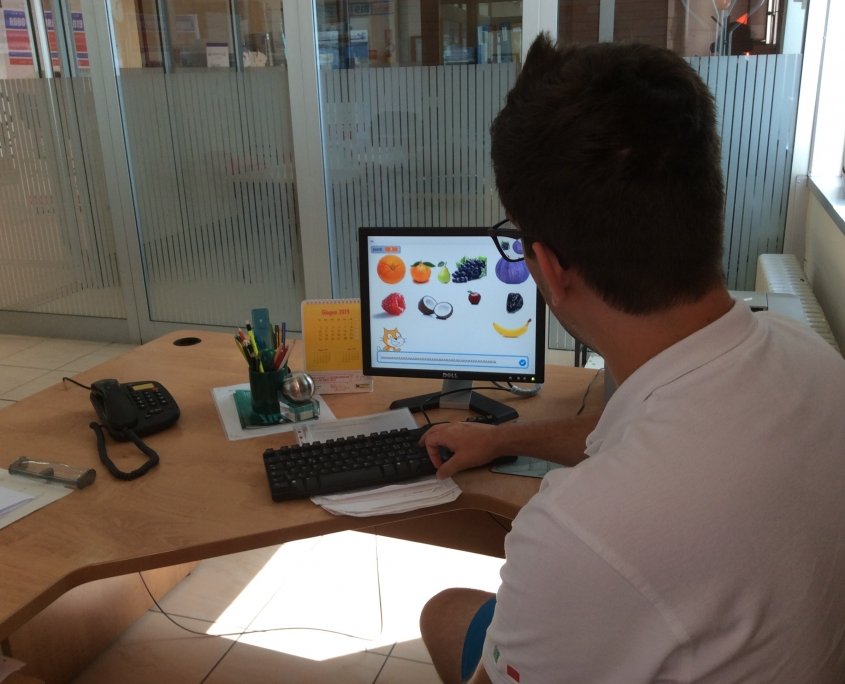 Christian is 16 years old and studying at the Higher Technical Institute “Vallauri” in Fossano, Piedmont, he has finished his second year and is about to start his third year of courses in computer science. He follows a differentiated program because of his intellectual disability despite being an attentive and participatory boy.

He was accompanied on an extraordinary learning adventure by Professor Alberto Barbero, his computer science teacher, and Professor Maria Teresa Lingua, his support teacher.   The full collaboration between the two teachers was successful: Alberto explained the logic and operation of the software Scratch for coding to Christian’s class and Maria followed him in his learning and creating the programs through laboratory activities in the support classroom. Christian explains that “Scratch is a simple programming language to start with which you create applications and games. You program a kitten. The most beautiful application was the programming of a calculator “from scratch”.

Christian, together with a small group of other young people with learning difficulties had explanations reinforced by Alberto, the guidance and support of Maria Theresa, and the help of four students from the fourth year, for one hour a week, from January to the end of May, to develop projects using Scratch.

Christian was very good from the start, he had an extra edge, the professor had not yet finished his explanation when he immediately put it into practice, becoming passionate. From him came the idea of applying Scratch to school subjects.

Christian has created projects in mathematics, physics, geography, English and history, combining his ability to program with research on the discipline’s contents similar to those covered in class. After developing the programs in the laboratory, he presented them to the teachers who evaluated them from the disciplinary perspective. Scratch has become very central to personalized teaching for Christian: he has found a way to express himself using what he does best and the teachers have valued his work.

In geography Christian has written his longest program, an app that allows you to study the characteristics of continents, oceans, rivers, mountains, cities, reading maps and looking at images. On each card or image, the kitten asks questions: the game is to insert the correct answers to the questions asked by the kitten; an error is reported and you can try again until you get the answer right.

It can be clearly seen in the screenshots: on the left – the question and the image; and on the right – the programming work done by Christian

Fundamentally, this is the teaching logic of Learning by Doing:  while programming Christian focused the questions, sought the answers, took care of the correct formulation of all the written parts; Maria Teresa followed him in this part which for him was more difficult than the programming.

I became good at Scratch – says Christian – and together with my companions I took part in a competition in Turin representing the Institute, we finished second and we won a nice prize.

Christian’s training in visual programming with Scratch forms the basis of his learning journey in programming.  Alberto, in fact, explains that it will be easier for Christian to approach the other programming languages that he will do in the third year such as AppInventor and HTML.

The development of his skills in this activity is evident, including in terms of awareness. Christian, in fact, made it clear to himself what he could do on his own and for what he needed Maria Theresa’s help. After a few lessons, he became so good that he helped other students, creating a sort of Peer Learning group.

Scratch in the case of the “Vallauri” laboratory proved to be useful for promoting the use of coding not only as a compensatory measure for students with disabilities or learning disabilities but also as an alternative educational tool.

This was a very significant inclusion experience because, thanks to a teaching plan carried out by the curricular teacher and the support teacher at the appropriate time and space, Christian was able to have a personalized learning experience within a peer group.  An experience that can also be replicated in other contexts because it is based on a good educational relationship between curricular and support teachers who have put together their professional skills, and on the decision of the school to dedicate a weekly time in the laboratory to children with difficulties so as to put into practice the curriculum taught through the use of coding and the potential that this new tool provides.

This story is part of Multinclude Inclusion Stories about how equity is implemented in different educational environments across the globe. This work is licensed under a Creative Commons Attribution-NonCommercial-NoDerivatives 4.0 International License.

Author is a teacher in a Secondary school and collaborator in a research team of Didactics in Cattolica University of Milan. As a researcher and teacher  Enrica’s  fields of interest are Inclusive Education, Educational Innovation and History..